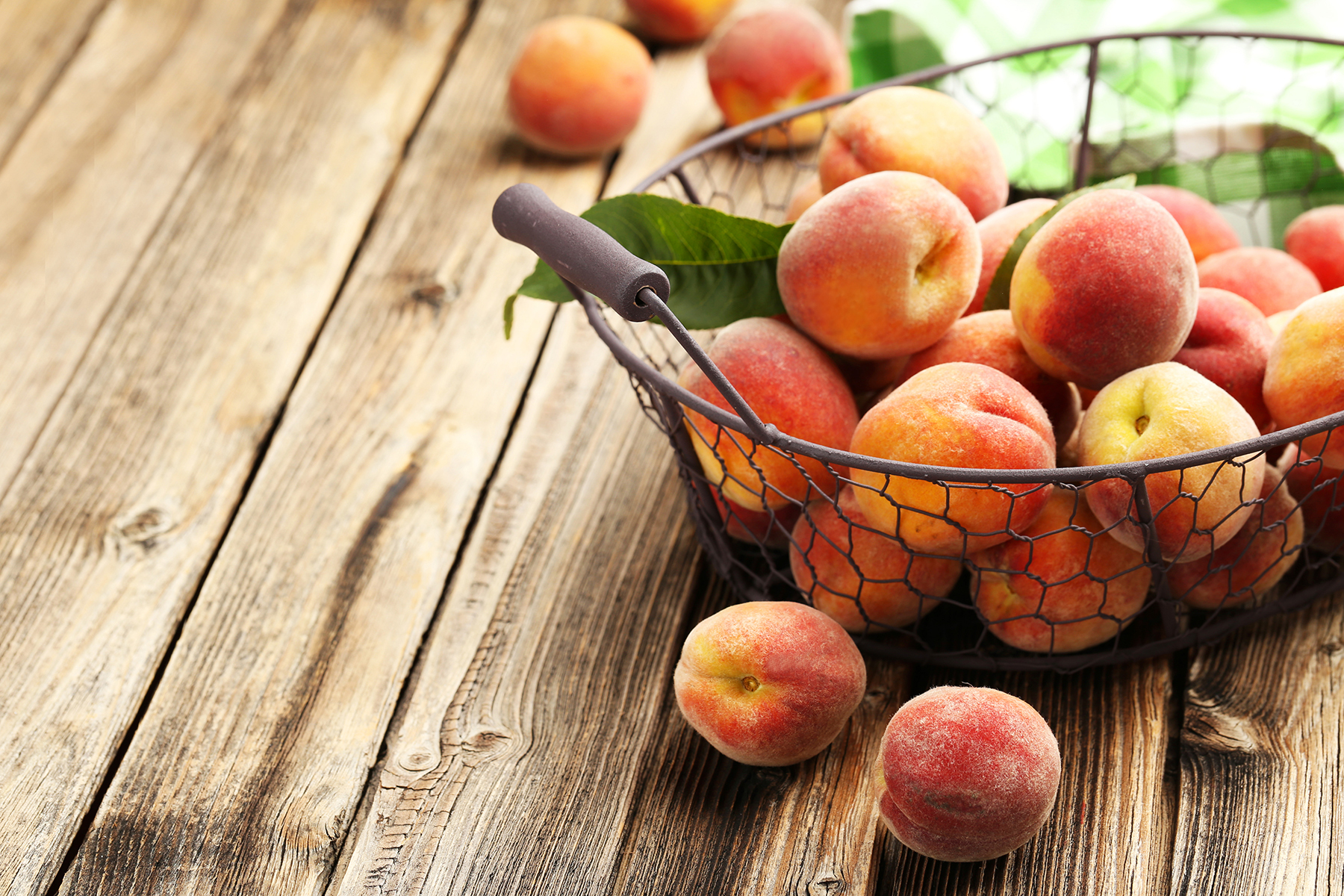 Afraid of spirits? Plant a peach tree near your house. At least the ancient Chinese culture recommended doing so, as its wood was believed to protect people from ghostly evils. In the 10th century, the Chinese emperor had an entire army march before him carrying peach blossoms as he travelled from town to town. Today, the peach tree promotes great health, as its fruit is packed with nutrients and antioxidants, aids with digestion, improves heart health, decreases inflammation, contains beta carotene which is important for healthy vision, and much more.

While Georgia has a long history of being the “peach state,” (that is its nickname, after all), you may not realize that North Carolina is a top peach producer as well. (However, internationally, China claims the #1 spot of peach production by a long shot.) Some of my favorite varieties of peaches were developed right here in the Tar Heel state. Candor, Bisco, Norman, Winblo, and Carolina Gold (no relation to Acapulco Gold) are some of the best and most popular North Carolina peaches.

With some of these varieties dating back to the 1920s, you might be tempted to call peaches heirlooms – but that’s a dirty word among Tar Heel peach growers. Instead, they prefer heritage. In the early days of peach production in our state, the peaches of choice were Georgia Bell and Elbertas. Prized for their canning and freezing, everyone wanted them. But they were the only game in town at that time. There was a peach boom – farms that were worth a fair dollar switched their crops to peaches to ride the wave of popularity. But as more and more peaches flooded the market, topped with bad weather, “short tree life” (sudden wilting of a couple of branches or collapse of the entire tree soon after bloom), nematodes, and among other things, cankers (caused by fungal diseases), the market took a dive and farms went broke – thus, there was a peach bust. Thankfully, in the 1940s, the NC Department of Agriculture and NC State came to the rescue and formed the Sandhills research station where they were able to develop better varieties to grow in that particular region of the state. The resulting Sandhill peaches, such as the Emory, Troy, and Whynot – while perhaps not quite as famous as their predecessors – are absolute must tries for anyone passionate about peaches.

With such a great texture and flavor, it’s no wonder that the peach is great for everything your taste buds crave. From salads to desserts, there is no reason that every meal, during season, can’t feature the fruit. Peaches are perfect in pancakes, oatmeal, and yogurt for breakfast. For lunch, how about a peanut butter and sliced peach sandwich? For a mouthwatering dinner, perhaps grilled pork chops and grilled peaches served with a frozen peach daiquiri. Cap off your evening with a refreshing peach bramble or ice cream topped with a bourbon roasted peach sauce.

In an 8½ x 11 baking pan, add sliced peaches, 1/2 cup sugar, and cinnamon, mixing well. In a food processor, cream the butter and the remaining 1/4 cup of sugar. Add oats and flour. Mix well, but don’t chop the oats too much. Sprinkle the oat mixture over the top and bake at 350 degrees for one hour, or until topping is brown. Serve hot, and top with a scoop of vanilla ice cream.

Place all ingredients in a sauce pot and cook at low simmer until peaches break up. Serve hot on top of vanilla ice cream.

This summer, whether you’re looking to ward off evil spirits, fill your body with vitamins and nutrients, or you simply want to sink your teeth into one of Mother Nature’s seasonal sweets to cool you off on a hot day, look no further than the good ol’ peach.