A LITTLE HISTORY OF THE DELIGHTFULLY DELICIOUS SWEET TREAT 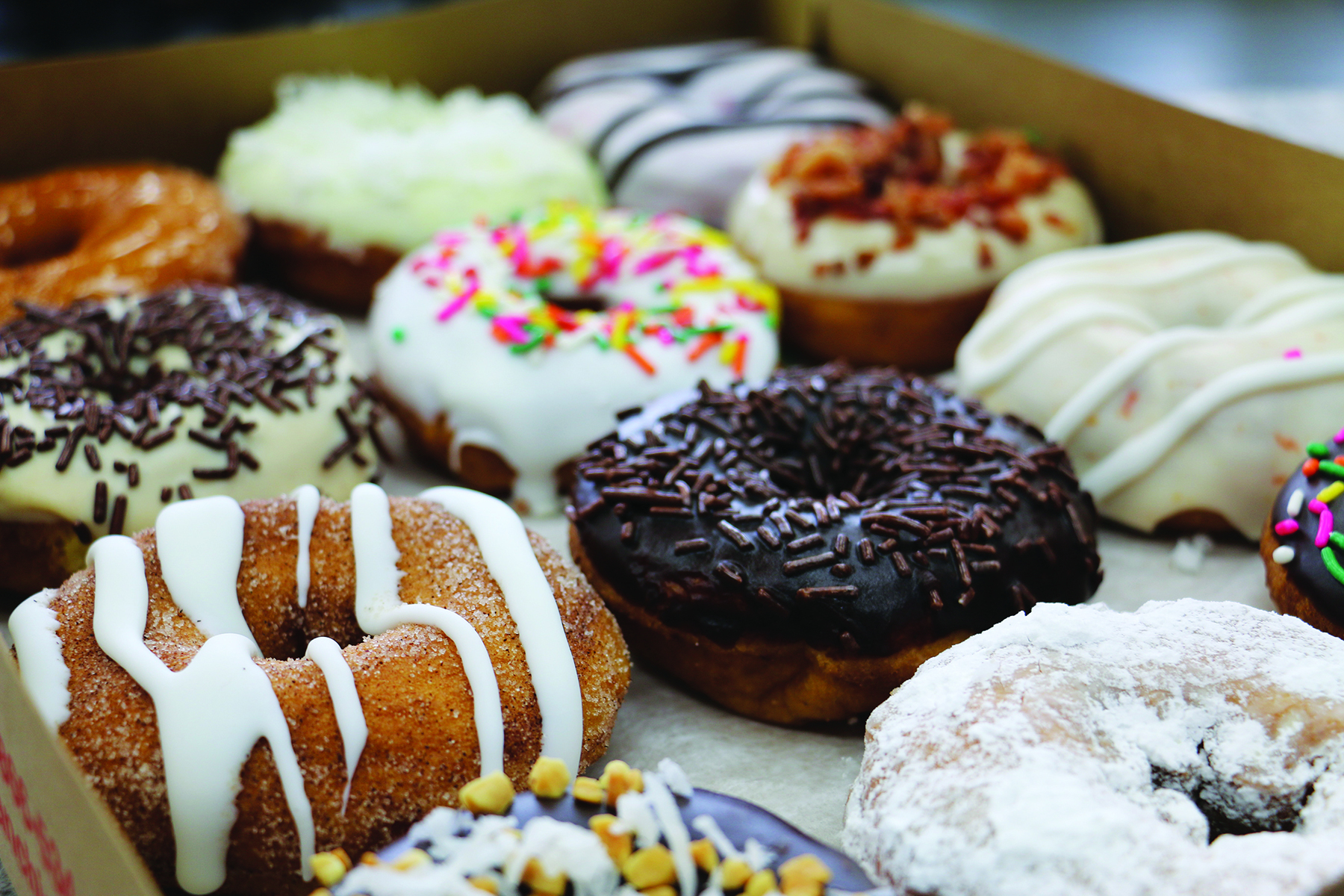 Donuts are the quintessential American treat – available and affordable for the masses, yet adaptable for sophisticated palettes and reflective of foodie trends, thanks to a rich history of innovations. From its humble origins, the donut has evolved into an indulgence that is just as likely to appear on the menu at a five star restaurant or formal wedding as it is to pop up on a food truck.

Though there is some debate around precisely when donuts were introduced in the United States, it is believed that around the time of the Revolutionary War (1775-1783), Dutch settlers in New Amsterdam (now Manhattan) brought with them recipes for fried “olykoeks,” or oily cakes. These donut predecessors were created by dropping spoonsful of dough into hot pork fat.

By 1847, a New England ship captain’s mother, Elizabeth Gregory, was famous for her deep-fried dough stuffed with walnuts or hazelnuts in the middle, where the dough might not thoroughly cook. It is said she made the treats because of their long shelf life – ideal for her son Hanson and his crew to enjoy on long journeys. This is where many believe the word “doughnut” originated.

During World War I, Salvation Army volunteers cooked and distributed donuts to homesick American soldiers in the trenches in France. These beloved volunteers were affectionately nicknamed “doughnut girls,” and undeniably established donuts as a comfort food in the hearts and minds of American GIs.

Fast-forward to 1920, and Adolf Levitt, an entrepreneurial Russian refugee, unveiled the first donut machine at his New York City bakery. Levitt produced approximately 18 dozen donuts per hour to the delight of his fans. Automatic production amazed crowds of onlookers, and at a cost of less than a nickel each, donuts became the darling of Depression-era families seeking a simple pleasure.  Throughout the 1920s, new immigrants arriving at Ellis Island were often greeted with two items: a blanket and a donut. By 1933, donuts were so popular that they were declared the “Hit Food of the Century” at the Chicago World’s Fair.

Consumer demand gave rise to donut chains, which exploded across America during the 1950s. Donut production at some retail bakeries reached 75 dozen donuts per hour.

The rise of “gourmet” donut shops in America today has introduced new flavor combinations and concepts that continue to pique consumer interest. Dutch settlers likely wouldn’t have guessed at the popularity of donuts dipped in chocolate icing and topped with rainbow sprinkles. And they certainly would not have dreamed that donuts topped with a mix of sweet maple icing and savory bacon would be one of the top trending donuts in North Carolina in 2016! The humble donut marches on.

– Over 10 billion donuts are made in the United States each year.
– “Doughnut” is the original spelling of the word, and the preferred spelling internationally. “Donut” is an Americanized spelling that has gained in popularity since the 1950s.
– According to Census records, at least 10 people in the U.S. have the last name Doughnut or Donut. 498 have the name Sprinkles!
– National Donut Day is celebrated the first Friday in June. This day commemorates the Salvation Army “doughnut girls” from WWI.
– Some Americans of German descent eat jelly-filled donuts on New Year’s Eve in order to bring good luck in the year ahead.
– The Guinness World record for eating donuts is held by John Haight, who consumed 29 donuts in just over six minutes.
– The tallest stack of donuts ever built measured 43.5 inches tall and was constructed by members of 20th Century Fox and Capital Radio to celebrate the premiere of The Simpsons Movie in July 2007. It was comprised of 1,764 donuts in the shape of a pyramid.
– Boston has the most donut shops per capita in the U.S. – one for every 2,480 people.