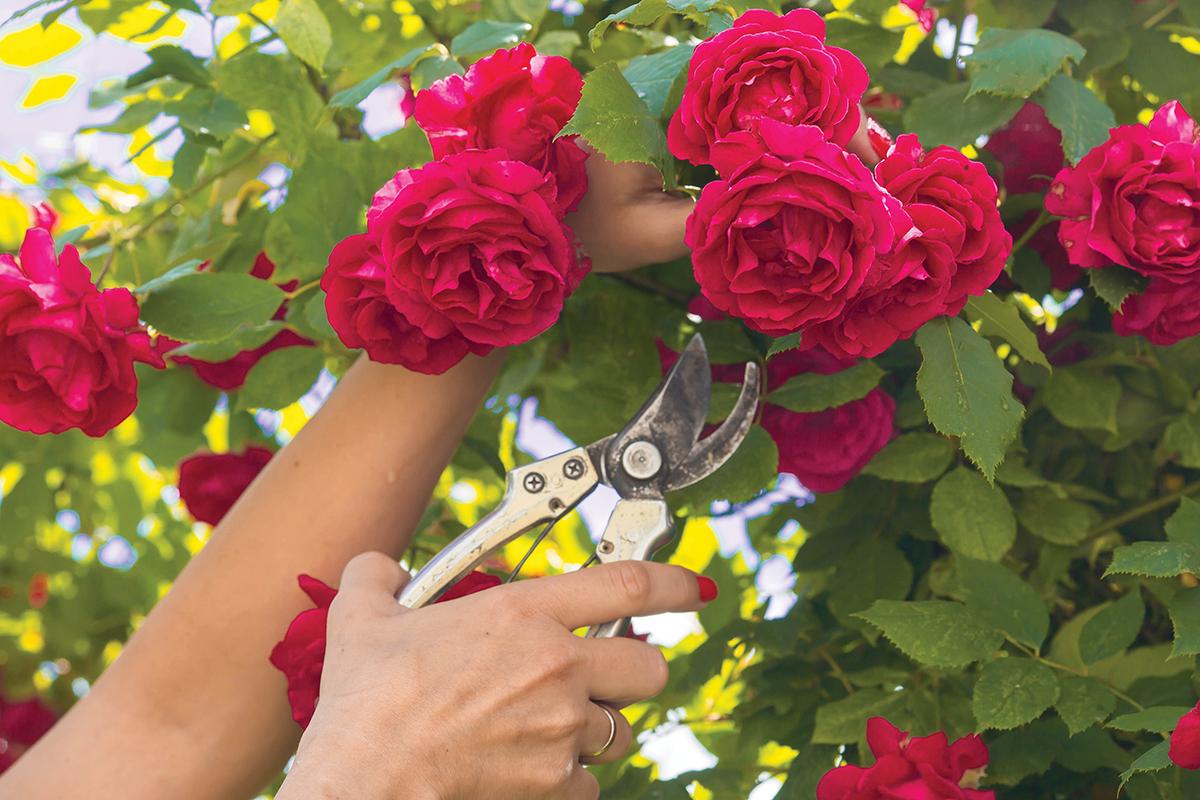 Pruning, while not necessarily the most enjoyable of the landscaping tasks, is important not only for the beauty of trees, shrubs, and plantings, but also for their health, and the safety of others. It is the practice of removing their roots, buds, or branches that are dead or dying due to pests, disease, and lack of sunlight, or trimming them for aesthetic purposes and to encourage healthy plant development. A regular pruning schedule protects your plants, people, and property from injury, bugs, and damage.

– Maintain safety: Remove low-growing branches if they impede passing vehicles or obscure oncoming traffic from view. You may also need to take out split or broken branches before they have the chance to come crashing down on a person, car, or building. It’s wise, too, to prune out low-hanging, whip-like branches (especially those with thorns) that may strike passersby.

– Alter or rejuvenate growth: Neglected, overgrown shrubs can sometimes be turned into small, multi-trunked trees if you remove their lower limbs. This may be a better approach than digging out the shrub and planting another in its place.

– Direct growth: Pruning influences the direction in which a plant grows. Each time you make a cut, you stop growth in one direction and encourage it in another. This principle is important to keep in mind when you train young trees to develop a strong branching structure.

– Remove undesirable growth: Prune out unwanted growth periodically. Cut out wayward branches, take out thin growth, and remove suckers (stems growing up from the roots) and water sprouts (upright shoots growing from the trunk and branches).

– Promote plant health: Trees and shrubs stay healthier if branches that are diseased, dead, pest-ridden, or rubbing together are removed.

– Create particular shapes: You can prune a line of closely planted trees or shrubs as a unit to create a hedge.

– Produce more flowers or fruits: Flowering plants and some fruit trees are pruned to increase the yield of blossoms and fruit to improve their quality. You’ll need, for example, to remove spent flowers from roses throughout their bloom time. For some fruit trees, you’ll make small, precise cuts each dormant season. Although this sort of pruning sometimes ranks as a tedious chore, remember that your efforts will pay off in lavish blooms and generous crops of fruit at harvest time.

Pruning at the wrong time won’t damage plants, but it can sacrifice that year’s flowers or fruits. As rules of thumb:

– Prune spring-flowering shrubs and trees immediately after the flowers fade.
– Prune summer-blooming trees and shrubs in winter or early spring, before new growth emerges.
– Late summer pruning encourages new growth that might not harden before the cold winter temperatures settle in.

Summer is a good time to prune those plants that blossomed early in the spring. For instance, you may want to prune your azaleas or forsythia plants. Summer pruning of spring blooming plants allows you to manage their size and/or improve their structure, while still allowing plenty of time for the plant to develop flower buds that will bloom when spring arrives again next year.

If you aren’t a fan of frequent hedge pruning, then trimming shrubs during the summer season is a good idea. Typically, they grow back less vigorously after being pruned this time of year than when pruned during the spring months, with their cooler temperatures. This potentially allows more time between hedge pruning sessions. Additionally, you should go ahead and cut out the watersprouts on your trees while you have the pruning shears out. Like hedges, watersprouts grow back less robustly when they are pruned in summer.

Rather than full pruning, some gardeners like to thin plants in summer because one, it’s easier to see how much thinning is needed when branches are still thickly foliaged, and two, growth is slower this time of year, so it is less likely to stimulate new growth – an advantage when thinning.

There are four basic pruning cuts, each aimed at producing a different effect. For cuts that involve cutting above a growth bud, angle your cut at about 45 degrees, with the lowest point of the cut opposite the bud and even with it and the highest point about 1/4-inch above the bud. Each of the following steps can be applied to your specific pruning needs.

– Cut 1: Pinching is one of the “easiest” cuts to make, without actually cutting. Simply pinch off a terminal bud with your thumb and forefinger. This stops the stem and encourages bushy growth. It is typically done on annual and perennial flowers, and on some vegetables. Also use it to direct growth of small-leaved shrubs and give the plant an even shape.

– Cut 2: Heading means cutting farther back on the shoot than you would for pinching. In most cases, the lateral bud has already grown a leaf, and you cut right above it. Usually done with hand-held pruners, heading stimulates the buds just below the cut, encouraging dense growth.

– Cut 3: Shearing, customarily used to create a hedge or bush with spherical or square form, is a form of heading that makes no attempt to cut back to a bud. However, because plants chosen for this treatment typically have many lateral buds close together, you’ll usually end up cutting near one. Shearing stimulates many buds to produce new growth, so you’ll be repeating the job regularly after you start. Because this method cuts right through leaves, it’s best done on small-leaved plants, where damage is less noticeable. Use handheld or electric hedge shears for this.

– Cut 4: Thinning reduces the bulk of a plant with minimal regrowth. Each cut removes an entire stem or branch, either back to its point of origin on the main stem or to the point where it joins another branch. Because you remove a number of lateral buds along with the stem or branch, you’re less likely to wind up with clusters of unwanted shoots than when you are making heading cuts. (A common mistake of inexperienced gardeners is to make a heading cut when a thinning cut is needed.) Use handheld pruners, loppers, or a pruning saw to make thinning cuts, depending on the thickness of the branch being cut.

– Hand shears: Use hand shears for branches up to 1/4-inch in diameter. Scissor-type shears make tight, close cuts on plants. Hold shears to make sure they fit your hand and feel comfortable.

– Lopping shears: For branches up to 11/2 inches in diameter, reach for lopping shears. Buy shears with lightweight handles for easy use. Extendable handles let you reach higher branches.

– Pruning saws: For branches more than 11/2 inches in diameter, use pruning saws. Coarse teeth cut on the pull stroke for easy and safe pruning.

– Pole pruners: You’ll need pole pruners for branches more than 1-inch thick and beyond arm’s reach. Pole pruners feature a pruning shear head or saw that works via rope action. Look for pruners with a handle that disassembles for easy storage.

– Hedge shears: Use hedge shears for shaping and snipping new growth on shrubs.