GOING FORTH WITH PROMISE ... THE DUBOIS SCHOOL AND HISTORY MURAL PROJECT 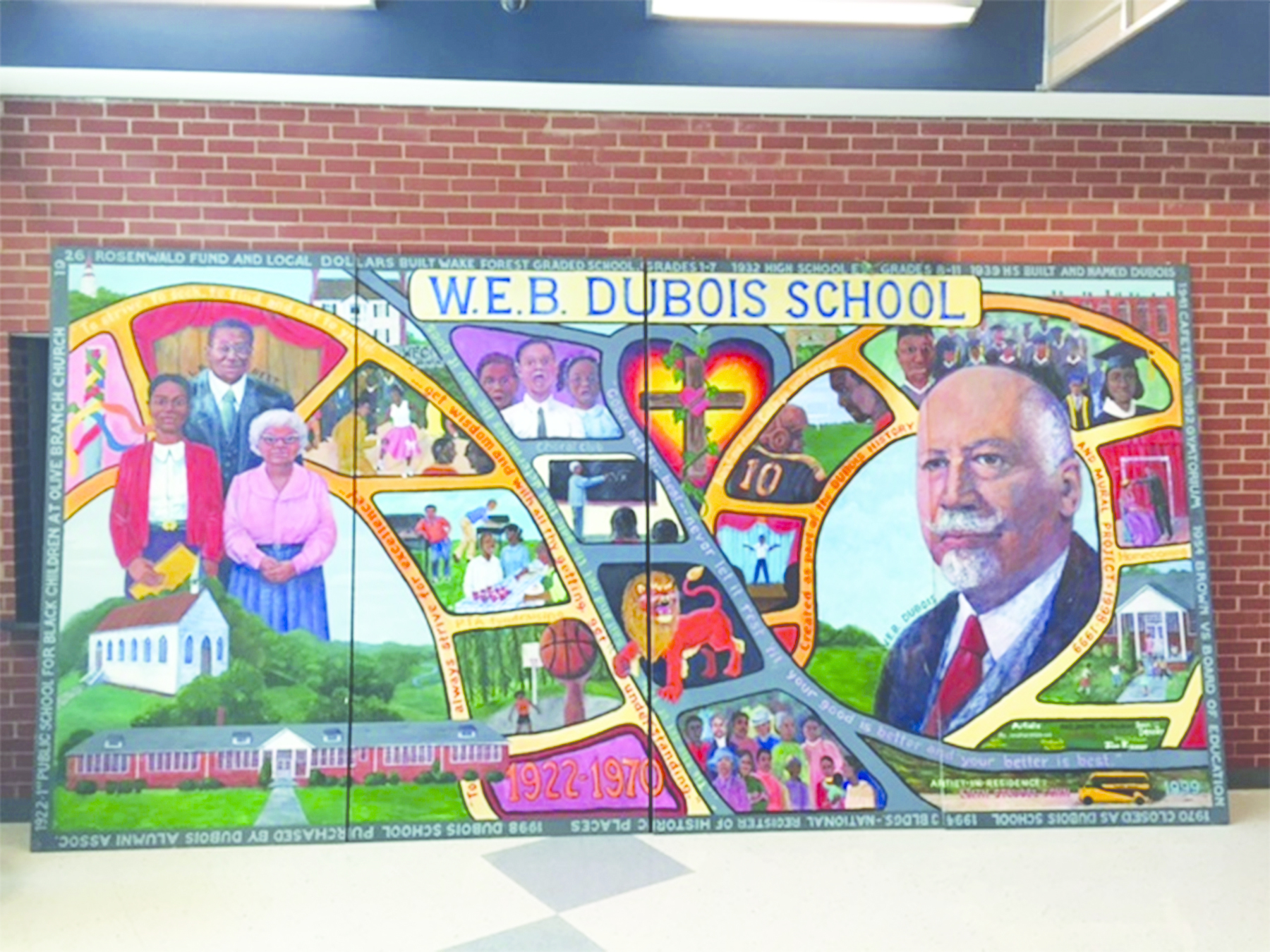 Wake Forest is graced by a rich educational and cultural legacy. With so much attention given to the beginnings of Wake Forest University, other aspects of the town’s history could go by the wayside, a discussion of which would not be complete, nor nearly as fertile, without the story of the DuBois School, the town’s first tax-supported school for African Americans.

From modest beginnings, this well-respected institution came to represent one of the most important cornerstones of the African American com-munity – the education of its young people.

Founded in 1922, the Wake Forest Graded School was first housed in Olive Branch Baptist Church, where it met children’s educational needs at the primary grade levels. Additional grades were added over time, and in 1939 the institution was renamed DuBois High School. In the early 1920s, Olive Branch trustees secured property from the family of Wake Forest College professor, Dr. W.G. Simmons, and a frame school was constructed on property at the corner of Juniper and Taylor streets in 1924. In 1926, with funds provided by both the local African American community and philanthropist Julius Rosenwald, founder of Sears Roebuck and Company, a better building was constructed. (Some 5,300 Rosenwald Schools were built in the South, with 800-plus – more than any other state – here in North Carolina.) Additional land purchased in 1928 allowed the school to move to its present site on Franklin Street where, in 1939, a new high school building was constructed. Over time, additional structures came to dot the campus.

Between 1922 and 1970, the school was a compelling influence in the lives of the hundreds of students who walked its halls, as well as in the life of the community that created and sustained it. With the advent of desegregation, the last class graduated from DuBois in 1970. The buildings then became home to Wake Forest Junior High and, later, Wake Forest-Rolesville Middle School. When the middle school moved to a new site in 1989, the old campus was closed.

In intervening years, the campus was revitalized and renamed The DuBois Center. Restoration of the gym and the Agricultural Center allowed it to serve the community through various programs and cultural events, including a jazz festival, work readiness program, after-school tutorials, computer lab, food pantry, and mental health services.

“The work we did there with restoration of the gym and the Ag. Shop allowed us to continue to use the campus the way the ancestors wanted – to serve the community,” says former DuBois Center Director Bettie Murchison.

In 1993, three of the school’s buildings were placed on the National Register of Historic Places, and in the mid ‘90s, the DuBois Alumni Association purchased the property from the Wake County School Board. In 1997, The Wake Forest Cultural Arts Association, DuBois Alumni Association, and Wake Forest Historic Preservation Commission partnered with Wake Forest-Rolesville High School to create a community-wide, grants-funded event – The Dubois History and Mural Project. Two years in the making, 11th grade English students gathered oral histories from DuBois alumni and collaborated with Durham playright Nayo Watkins in creating and presenting a play, “Go Forth With Promise,” (performed in 1999). In addition, Art Department students created a mural of DuBois School to be permanently displayed at the High School.*

Within the scope of the history and heritage of Wake Forest, the Dubois School is truly a shining star, and the History and Mural Project one of the most significant com-munity undertakings of the past several decades. This writer was fortunate to have a role in the project as its Site Coordinator. The number of committed players provided an excellent arena for shared responsibility and teamwork, and the diversity among the sponsoring organizations and volunteers allowed the project a richness of flavor and a depth of experience that was truly a joy to behold.

*The mural hung for a number of years at Wake Forest-Rolesville High School. It is hoped that it will soon be on permanent view there again, or at the least, on view yearly in Wake Forest during Black History Month.

Thanks to Wake Forest High’s Yolanda Robinson, Dee Skinner, and Vicki Crouse. Additional thanks to Bettie Murchison for photography and supplemental factual material.