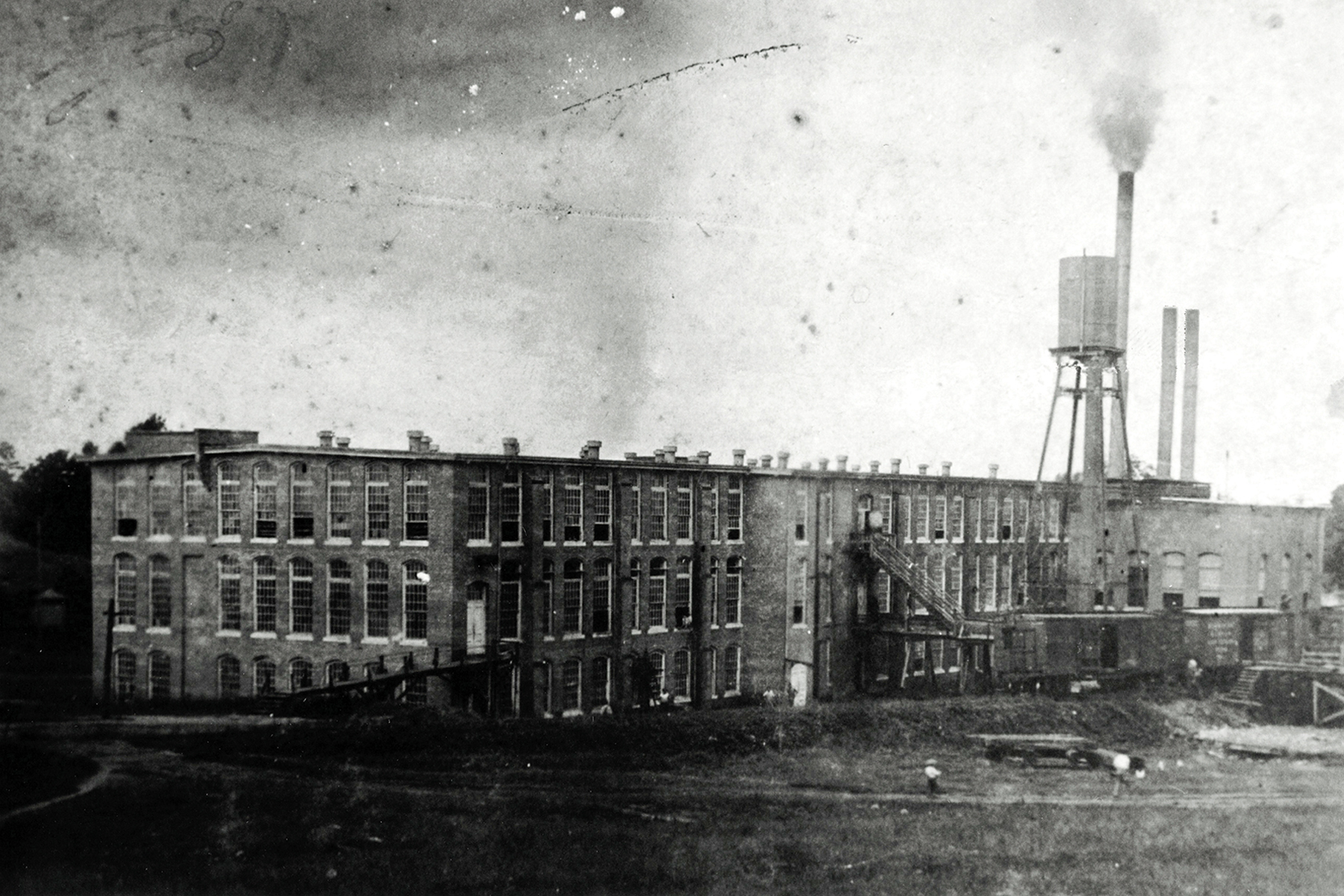 Wake Forest has been called five towns in one – Wake Forest College and Faculty Drive, The Northeast Community, Forestville, The Harricanes, and a hidden gem that many folks who live in Wake Forest today aren’t even aware of – the Royall Mill Village. If you drive up North Main Street past the stately homes, you will skirt the Royall Mill Village. Proceed just a little farther where the road becomes two-way and look for the entrance to Royall Mill Apartments on your right. There is an imposing three-story massive brick factory building, now apartments, that for nearly a century was Wake Forest’s textile mill.

In 1899, Robert E. Royall and his brothers-in-law, Thomas E. Holding and William C. Powell, all three Wake Forest College alumni, formed a partnership to establish a cotton mill just north of the town’s limits. While successful and prosperous businessmen, not one of them had any real knowledge of the textile business. But fortunately, Thomas Holding’s brother, William W. Holding, was a cotton merchant in town. By September of 1900, the mill building, the commissary, and approximately 30 houses were constructed and ready for operation. Not too long after, a 1908 addition made Royall Mill one of the largest textile mills in North Carolina.

To attract workers to the mill, the company built houses, each with two front doors, four rooms with 10-foot ceilings, a hip roof, and a central chimney serving a corner fireplace in each room. The houses could accommodate one or two families, and rented for 25 cents per room monthly. Soon, two other home styles were added to the village, along with a school for the mill workers’ children. By 1907, the village was incorporated as the town of Royall Mills, predating the incorporation of the town of Wake Forest by two years. Many local families were attracted to mill life, looking to escape share-crop farming. The mill also offered employment for many women to help support their families. Several workers were widows looking for a way to raise their children at a time when work outside the home for women with limited education was difficult to find. In addition to housing, the mill company offered a commissary where workers could buy groceries, clothing, and just about anything else a family needed at the time. Hours were long and work was hard, but these jobs provided a much-improved lifestyle for many from the poor rural areas surrounding the relatively affluent college town. But not all of the workers were locals – the mill also attracted laborers from other depressed areas of North Carolina and southern Virginia.

Life in the mill village was often referred to as that of a large close-knit family. Families looked after each other’s children, and after one another. Mrs. Joyce Alford Davis, whose parents and grandparents were mill workers, was born in the Town of Royall Mills. She describes her early years as happy ones, when family meant everything. Mrs. Davis grew up, got married, and eventually moved to one of those stately homes on North Main Street directly across the street from those of the original mill owners, the Royalls and the Powells.

While life in Royall Mills was tranquil, trouble did pay a visit. In the spring of 1951, a group of “outsiders” came to the village and made efforts to unionize the mill workers. Friends and even family members took opposite sides. In late April, while a cook-out to support striking workers was taking place on the grounds near the commissary, a shooting broke the peaceful night air. Several community members were injured by gun shots coming from a gunman (or gunmen) from an upper story of the mill building. Many families took their children and left Royall Mill. Fortunately, peace soon returned to the community.

After changing ownership several times, Royall Mill finally closed in April, 1976. Eventually the houses were sold, many to families who had lived there for generations. Today, the village – now long a part of the Town of Wake Forest – is one of the town’s National Register Historic Districts. Houses now privately owned have been remodeled. The villages two churches, the Church of God and Glenn Royall Baptist, still thrive and remain home to many families with ties to Royall Mill.

Next time you are taking a drive out North Main Street in Wake Forest, make a left turn onto Cedar Street or Oak Street and discover the Mill Village. You will surely agree that it’s a hidden gem.