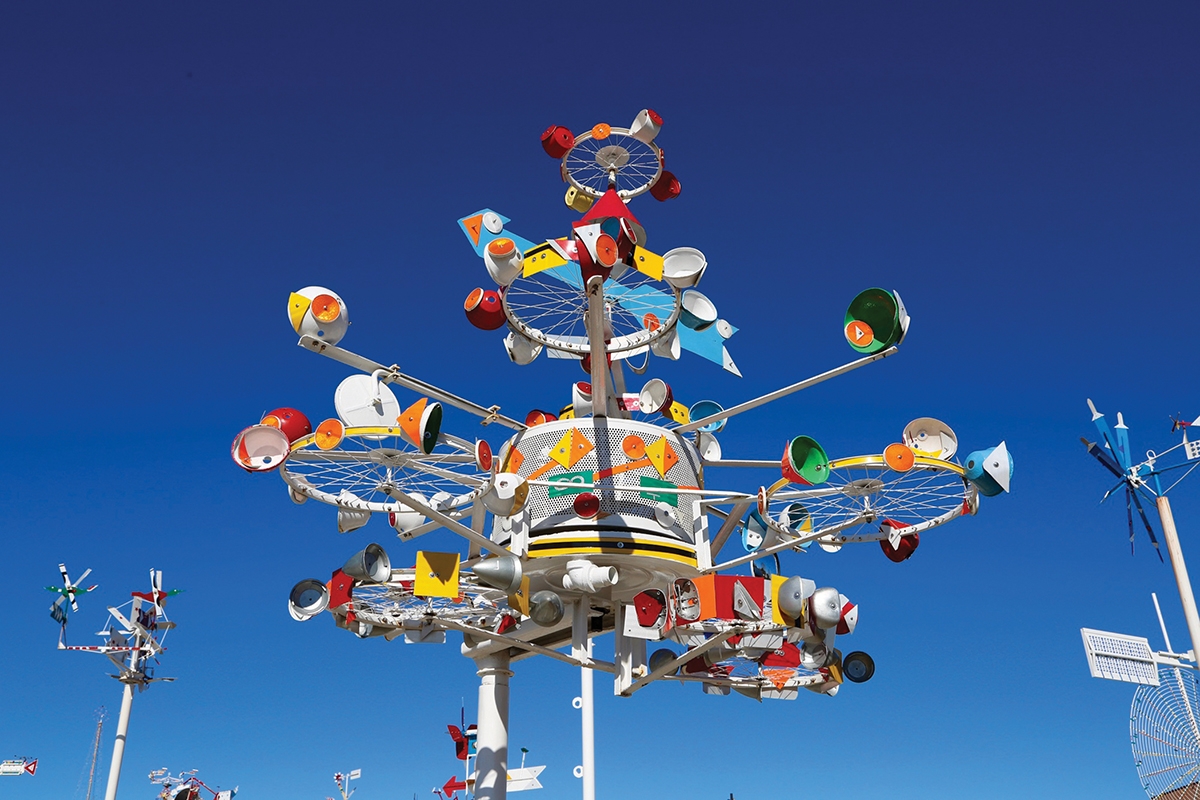 Farm machinery repairman Vollis Simpson began making gigantic, fanciful, wind-driven sculptures – popularly called “whirligigs” – at his family farm in Wilson County when he was nearing retirement age. Having gained an interest in collecting odd machinery parts, industrial salvage, transportation supplies, and other useful objects that he didn’t want to go to waste over the years, the story of Vollis Simpson’s famous whirligigs began, and where this issue’s “Hidden Gem” takes us.

While his fame came near the end of his life, Simpson’s story began in 1919 when he was born to a farming family with 12 children. As a boy, he helped his father supplement the family income by moving houses. He served in the Army Air Corps during WWII with duty on the South Pacific island of Saipan. The isolated troops struggled to keep uniforms clean, so Simpson experimented with rudimentary windmill technology using a junked B-29 bomber to power a large washing machine. After the war, Simpson partnered with several friends to open a machinery repair shop. As the years passed, he followed in his father’s footsteps and developed a house-moving side to the business. During both jobs, he began to collect the aforementioned machinery parts, industrial salvage, and transportation supplies.

After retiring at 65, he started tinkering around with his collection of odd parts. Using some of the same rigs he’d developed for moving houses, Simpson began constructing enormous windmills in his yard. They did not resemble the working windmills of grinding or irrigation use, but rather referenced the concepts of weather vanes and handcrafted whirligigs that are still seen locally on houses, fence posts, and barns. These creations incorporate highway and road signs, HVAC fans, bicycles, ceiling fans, mirrors, stovepipes, I-beams, pipe, textile mill rollers, ball bearings, aluminum sheeting, various woods, steel rods, rings, pans, milkshake mixers, and many more such materials that form the support and moving parts. He even cut decrepit road signs into one-inch and larger squares so that the whirligigs would be reflective at night. And images inside the whirligigs are farm animals and people – references to Simpson’s experiences, such as the many WWII era airplanes, lumberjacks sawing wood, and a guitar player based on Simpson’s son.

The field of these “whirligigs” soon began attracting the attention of locals. And he kept making these whirligigs – which in 2013 were named North Carolina’s official folk art – seven days a week, up until about six months before he died in May of 2013 at the age of 94. By that time, Vollis Simpson was famous. But he never called himself an artist. Upon his death, though, The New York Times did, describing Simpson as “a visionary artist of the junkyard … who made metal scraps into magnificent things that twirled and jangled and clattered when he set them out on his land.

The field, which was located 11 miles outside the City of Wilson, had already attracted the attention of local people. But after the rise of the Internet, out-of-state visitors began making their way to Simpson’s farm too, resulting in it becoming one of Wilson County’s top tourism destinations, as well as propelling the city’s downtown into the national spotlight. His work began to be discovered by art collectors, too. At the American Visionary Art Museum in Baltimore, Maryland, for instance, you will find his 55-foot-tall, 45-foot-wide “Life, Liberty and the Pursuit of Happiness” creation on permanent display. His works are part of several other collections as well, including the American Folk Art Museum in Manhattan and the one-time feature in a popular window installation at New York’s Bergdorf Goodman department store.

As Simpson’s health declined, he was no longer able to grease or paint the 40'-50' tall sculptures that were made from recycled industrial parts and had endured rain, sun, and hurricanes for 30 years. It became clear that without intervention, Wilson’s number one attraction would soon disappear. So in 2010, a plan was announced to create the Vollis Simpson Whirligig Park in Historic Downtown Wilson. A grassroots effort of many townspeople (and fans worldwide) banding together to save these beloved works of art – rescuing the whirligigs, and the city, at the same time – was underway. By leveraging one of Wilson’s most unique cultural assets into an economic engine of entrepreneurial job creation and tourism, the Wilson community added vibrancy to its Historic Downtown.

Simpson was delighted to see that his work would survive and continue to delight people for generations to come. He assisted in the effort to relocate the whirligigs to a downtown warehouse where they were restored, rebuilt in some cases, and repainted. 30 whirligigs, some standing 50 feet tall or more, were eventually transported, restored, and installed. Grants from ArtPlace America, the Kresge Foundation, and the National Endowment for the Arts helped the project become what is now the Vollis Simpson Whirligig Park and Museum, a part of a public/private partnership that includes City of Wilson, Wilson Downtown Properties, Wilson Downtown Development Corporation, Kohler Foundation, and others.

The two-acre Vollis Simpson Whirligig Park was originally conceived with the input of hundreds of Wilson citizens including downtown stakeholders, artists, youth groups, neighborhood associations, and business leaders. Through multiple community meetings, Wilsonians helped contribute to the design and vision for the park. As the project progressed, a workforce training program was developed and implemented in partnership with Wilson Community College, Opportunities In-dustrialization Center of Wilson, and St. John’s Community Development Corporation for whirligig repair and conservation. Over 50 jobs were created throughout the course of the whirligig restoration effort.

Designed by award-inning landscape architecture firm Surface678, the park features 30 of Vollis Simpson’s whirligigs. This is the largest collection in the world and includes some of his most colossal and impressive sculptures. The Green – a central grass amphitheater and stage, where everything from music to film engages the audience –

is a reference to the pond on the Simpson farm, with the surrounding whirligigs installed as they originally were around the body of water. Mimicking rows of crops in the fields and long lines of tobacco ready for auction in the warehouses, the rows of concrete and garden squares in the park pay homage to Wilson’s agricultural heritage.

The Pavilion – a large, open-air shelter that was created to house downtown arts, crafts, and farmers markets, as well as other community events, activities, and educational programs – echoes surrounding tobacco auction warehouses. Specialty night lighting illuminates the thousands of reflectors attached to the whirligigs, recreating the mystical experience at the original location when car headlights rounded the curve near the Simpson farm. Benches, tables, and chairs invite picnicking, reading, or just enjoying art and nature. Practice Tai chi, have a picnic, celebrate a family reunion, or play flashlight tag among the reflective whirligigs – the possibilities are endless.

Vollis Simpson Whirligig Park is free and open daily, including holidays, from 5:00 AM to 12:00 AM. For more information about this nearby hidden gem, directions, photo gallery, calendar of events, and more, visit wilsonwhirligigpark.org and follow them on Facebook (@V.S.WhirligigPark) and Instagram (@whirligigpark).