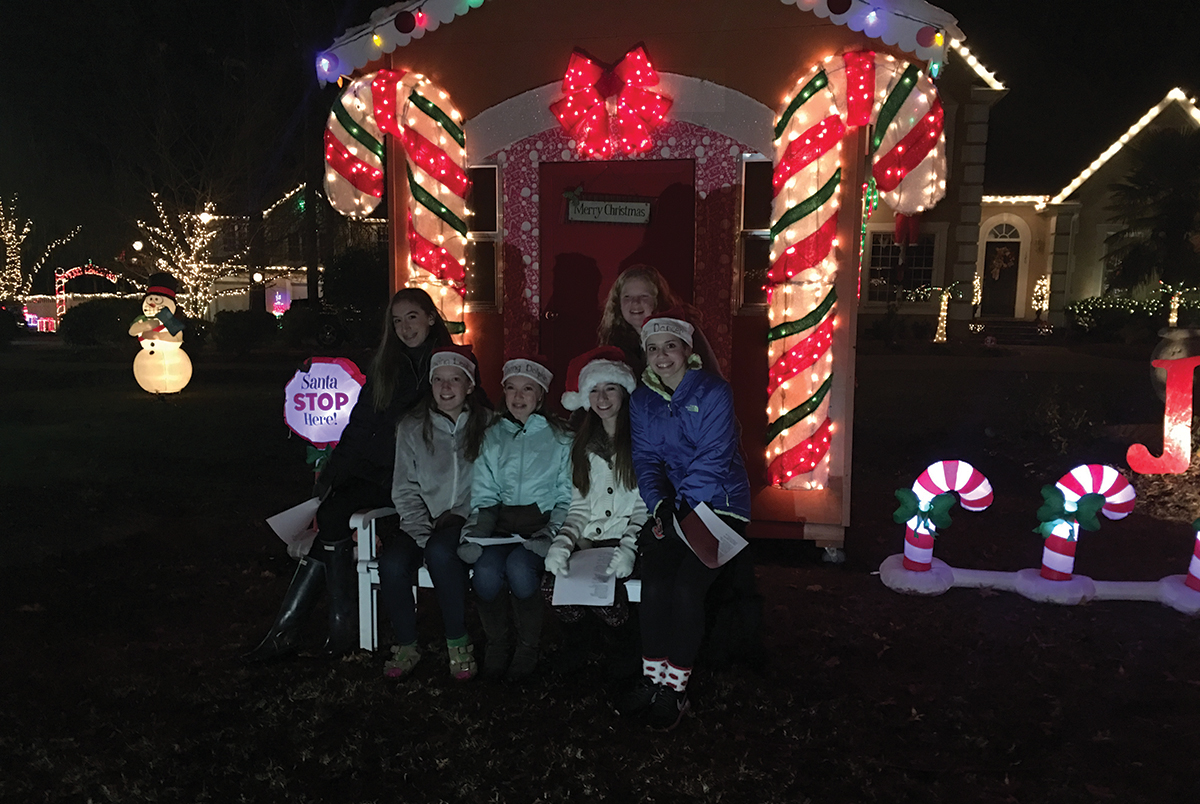 When your Christmas story begins with Big Daddy tackling holiday traffic to acquire a two-story inflatable reindeer, you know you’re on to something. When the story ends with a holiday light display that covers three acres, four houses, and five yards, you know it’s utterly unique in the annals of small town holiday celebrations. And that’s why this “Driveable Destination” is three important things: special, fun, and within the Wake Forest zip code. Because no matter how far you drive, you can’t top the Wright Family Christmas Light Display on Cedar Avenue in the North Main Street Historic District.

The members of the Wright Family are a Wake Forest tradition unto themselves. Ricky and Jane were high school sweethearts who got married, raised a family, and helped the town develop and grow. Along with their daughter Hollie and son-in-law Jimmy Hicks, they own and operate the highly successful Electric Motor Shop on North White Street, which specializes in providing and repairing high-tech machinery for clients across the United States. This means the Wrights are exceptionally well-qualified in the organizational aspects of running a vast electrical operation, which is exactly what the two-month Christmas extravaganza has become.

Just to be clear, there was a time when the Wrights celebrated Christmas like any other family. But that all ended when Hollie and Jimmy’s twin sons Chandler and Chase were born on January 2, 2002. Ricky became Big Daddy and Jane became Nana, and as the boys’ first Christmas approached, they concocted a plan worthy of the number one spot on the ultimate list of “Amazing Things Grandparents Do.” The idea was to create a new holiday tradition by taking the twins on an annual trip to buy lights, yard art, and inflatables. Nana and Big Daddy encouraged the boys to select anything they liked – which is how the Wrights acquired the two-story inflatable reindeer. It’s also how a modest seasonal jaunt to Home Depot or Walmart eventually expanded into a countywide search for the most dazzling Christmas décor available in central North Carolina.

But as Rome wasn’t built in a day, neither was the Wright Family Christmas Light Display. Over the years, the family has developed a routine. At the end of September, they gather together, remove the decorations from storage, lay them out in the backyard, and take a full inventory. Every strand of twinklers is inspected. Each extension cord is tested. The inflatable Santas and snowmen are blown up and checked for leaks. In mid-October, Chandler and Chase haul the decorations to the front of the house, the family starts installation, and the cherry-picker arrives to string bulbs in the tallest trees. Then Nana and Big Daddy take the boys shopping to find something new. By the time Thanksgiving rolls around, the work is finished, the lights go on, and the family enjoys another holiday season together.

So that’s how the Wright Family Christmas had been humming along until about five years ago, when Hollie noticed something different. The first clue was the bus from the local retirement community that kept circling the block. The second was a certificate for “Best Christmas Decorations” that someone slipped into the family mailbox. Delighted at the thought that their lights were brightening the holidays for others in the community, the Wrights decided to make the display even bigger and better. About three years ago, they began inviting Santa Claus to join the festivities. On weekend nights in the month of December, he sits in a small Santa cottage in the front yard and greets children from 6:00 PM to 9:00 PM. “We started paying more attention to safety and traffic,” Hollie says. “Now we try to keep people in the walkway, and we hire an off-duty police officer during peak hours.” They’ve also lost count of how many people stop by, but estimate it’s in the thousands.

Spreading so much joy is no small task, and the Wrights buy enough extension cords and lights to illuminate a small city. They try not to think about the electric bill, which doubles during November and December. Nor do they worry about the rain as much as they did in the beginning. Some strands go out, but they always come back on when the ground is dry. (“You never know how much it rains in December until you’ve got a yard full of lights!” Hollie exclaims.) It’s all part and parcel of this personal adventure in grandparenting that has grown into a true Wake Forest tradition. My own family visits the Wrights every year to sing carols with friends and sit with Santa and marvel at the moving, spinning, glowing miracle of so, so, so many Christmas lights.

And because the Wrights are genuinely sweet and neighborly, they often venture outside to greet visitors and share in the spirit of the season. So here’s an interesting anecdote about what can happen. One evening, beneath the twinkling strands, a woman was looking at the lights and crying. When she noticed the Wrights, she came over to speak to them. She told them how much she needed to see lights that particular night. They meant a great deal to her and she was grateful. She wanted to say thank you. It’s this episode that offers the best explanation of why the Wright Family Christmas Light Display touches so many people, and why the family works so hard to get it right. The show is beautiful and unexpected and joyful and uplifting, but also humble and approachable and real – as any story with a Nana and Big Daddy at Christmas is certainly bound to be.

The Wright Family Light Display spreads across a large section of West Cedar Avenue in Wake Forest’s North Main Street Historic District. The easiest access is at the corner of Cedar and North Main. Although the specifics are top secret, the Wrights change the display every year and are confident this year’s light show is bigger and better than ever.