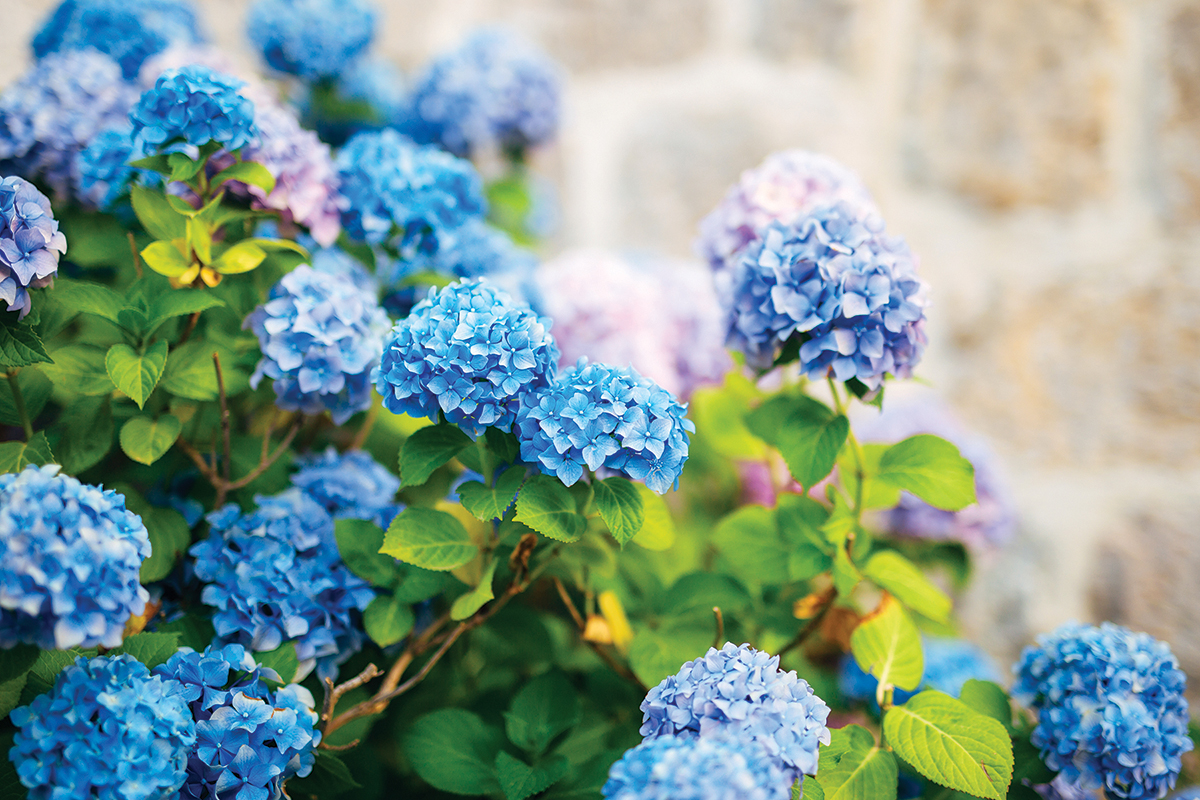 Known for their lush foliage and supersized blooms of beautiful spring shades such as clear blues, vibrant pinks, and snowy whites, hydrangeas provide outstanding interest in any spring and summer landscape and old-fashioned charm filling a mason jar or tin vase atop your kitchen table.

Common Species In Our Area

Big-leaf Hydrangea (aka French Hydrangea, Garden Hydrangea; Hydrangea macrophylia): The most popular and commonly grown group which includes the favorite blue and pink large, rounded cluster of blooms which are produced in summer. Colors are dependent on the pH of the soil and the amount of aluminum it contains. Most grow four feet to eight feet, depending on the cultivar.

Hydrangea Serrata: Similar to big-leaf hydrangeas, but generally with smaller leaves and flower clusters. This species generally grows to about three feet to five feet and tends to be more cold hardy.

Panicled Hydrangea (Hydrangea paniculata): A large grower to about 10 feet to 20 feet, and can be trained into a small tree. It grows quickly and produces large pyramidal panicles of white flowers starting in mid-summer (as the season progresses, they change to pink and stay attractive until about September). These prefer sun, but not a full day’s worth, and require regular moisture.

Oakleaf Hydrangea (Hydrangea quercifolia): A trouble-free native plant that is excellent for southern gardens. It bears panicles of white-changing-to-pink flowers from June through July and later. Its attractive leaves are dark green, changing to spectacular scarlet and burgundy in fall. Best with afternoon shade, generally growing to about four feet to six feet tall, sometimes eight feet or taller.

Smooth Hydrangea (Hydrangea arborescens): Growing to about three feet to five feet tall, it does well in full shade. In early summer, it produces large globe-shaped flower clusters that start out apple green in color and gradually turn white. The ‘Annabelle’ cultivar is the most commonly available and one of the showiest.

Hydrangeas prefer to be planted in moist, well-drained, fertile soils. When planting, amend the soil with leaf mold and/or compost along with soil conditioner to improve drainage if you have a clay soil. If conditions become dry, you will probably have to supply additional water. Mulch your hydrangeas to insulate roots against heat and conserve moisture in the soil. They should be sited in areas where they will receive morning sun and afternoon shade or in bright, dappled shade.

When fertilizing, feed hydrangeas with a balanced, slow-release granular food or organic fertilizer in April and May, making sure the formulation is not too high in nitrogen. If there is a lot of rainfall during this timeframe, you may want to fertilize again in July.

Hydrangeas are generally vigorous, fast-growing, and long-lived plants that are seldom bothered by pests and disease. Their main problem is leaf spot diseases which generally occur late in the season and are common in our humid climate.

Pruning requirements for hydrangeas vary by species, so be sure to research your particular plant before you start cutting them back.

Why Didn’t Mine Bloom?

1. Incorrect pruning: If you prune the common big-leaf hydrangeas too early, you will cut off the flowering wood.
2. Late frosts: This is not as common in our area, but it still occasionally happens. A late frost can damage buds that have already started to break dormancy in spring weather.
3. Too much nitrogen: If you are feeding with a high nitrogen fertilizer, switch to a lower nitrogen, higher phosphorous fertilizer such as 15-20-15. Nitrogen is represented by the first number in the three-digit sequence.
4. Not enough sun: Hydrangeas are shade tolerant but they do need some sun. Plant in morning sun and afternoon shade or where the plant will receive some later afternoon sun.
5. Not enough water: This can be a problem in drought years. Be sure to supplement with water if it’s dry. 